Skip to content
If Mother Teresa was alive, she would have been 103 years old today. One of my childhood interests, collecting autographs, started with Mother Teresa. Introducing “Just Autographs”, my autograph website. Updating the collection online is still in progress. Most of the autographs are those from earlier days… the collection has grown slowly since then, but still has enough to entertain and educate! To go to the site click here.

Collecting autographs is like collecting a piece of history.

The first autograph I got in person is also my most treasured.

I was just 8 years old when I tagged along with my mother and neighbours to meet Mother Teresa at Missionaries of Charity, Bangalore in Jan 1979. My mother had told me, “She is like a saint. Don’t forget to get her blessings.” So that is what I did! I touched her little feet and I also got her autograph in my first little autograph book. The pen Mother Teresa used (I can’t remember if I gave it to her or she used someone else’s pen) did not write properly, so she signed twice. And because the autograph book was made of thin paper, the impression went through onto the next page. I’ve saved that page too. 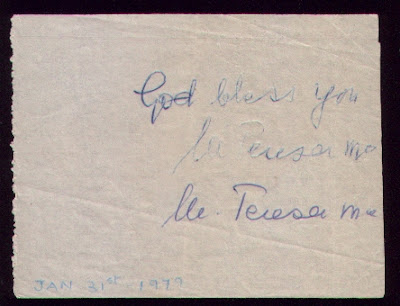 Subsequently, I’ve added several more autographs of VIPs (and not so important VIPs… people who have made a difference) to my collection. Some of the autographs I’ve got personally, some by writing letters and a few (from before my time) inherited. Friends / relatives who’ve bumped into VIPs have often remembered me and got the autographs for me. And there are some autographs that others got for themselves and were nice to pass to me!

During our childhood, my brother Nagesh loved to help me with my autograph collection. Once he excitedly gave me one of Shakespeare that he’d carefully copied from the Reader’s Digest encyclopedia onto crumbling parchment. Nagesh made up for those childhood pranks by seldom forgetting his sister’s autograph craze, getting various celebrities he encountered to sign. I’ve had a few other interesting encounters with fakes and it was good fun catching the culprits.

There were instances where the ‘celebrity’ flatly refused to give her/his autograph. Some of the letters I wrote received regretful replies. Some replies had printed or facsimile signatures, but there was still joy in getting a reply from whomever it was.

3 thoughts on “Mother Teresa got my autograph collection going”