Chasing a meagre target of 184 to win, the West Indies looked invincible. Our Indian team weren’t able to bat though the 60 overs. A required run rate of just over 3 per over was really peanuts for a batting line-up in which even the fast-bowler tail-enders could hit any bowler out of the stands.

In India, we were thrilled that our team had reached the final. At 50/2, the West Indies were cruising. Hopeful though we were at the start of the match, at this stage I think many of us felt that the Prudential World Cup was out of reach and it was inevitable that the West Indies would take it for the third successive time.

As was the practice in those days, Doordarshan television needed to take the nightly news break at the appointed time. So a few overs went by before the telecast resumed. Suddenly there was hope again! We had missed seeing Kapil Dev’s incredible backward running catch to dismiss Viv Richards, and the West Indies was not quite comfortable anymore.

It was indeed an exciting match. Mohinder Amarnath trapping Holding and running to the pavilion is engraved in the mind. Imagine bowling out the West Indies for 140! An incredible 43-run victory. Against all odds, the Prudential World Cup was India’s.

There were celebrations of many kinds in India, but no postal stamp was released. To commemorate this famous victory, the Baroda Philatelic Society brought out a special cover (sponsored by Thums Up). I got to know of it through a small write up in the newspaper and ordered through post, paying through postal order and mint stamps. 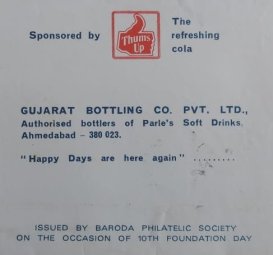 Here’s hoping that the 2019 ICC Cricket World Cup will be India’s, and there’ll be another occasion for a philatelic memory.