16-17 Richmond Road is where Spartan Heights Apartments is located. This is one of the early multi-storied residential buildings of Richmond Town built in the 1980s, but in the 1960s, this is where Mrs Hetty Pringle (and a few other families) lived.

After my grand mom died a few weeks ago, my mom and I were looking though the old photographs and some of the things of the old days that hadn’t been given away or thrown out. This brought back memories of growing up in Richmond Town… the friends, the hobbies, the homes, the neighbours… and Mrs Pringle. 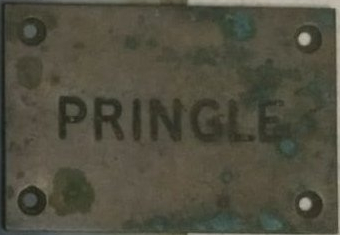 The Nair family shifted to Bangalore from a small town in Kerala in 1948, when mom was about two years old. Grandpa worked in the Survey of India that had its office on Richmond Road, so the family decided to move to the same locality. They lived on Serpentine Street-Leonard Lane. Living on two roads actually meant that the bungalow was so big that it extended between two roads, Serpentine Street and Leonard Lane, but its address was 12 Serpentine Street (new 24). The large compound had four fruit-laden guava trees, ideal for climbing. There were two entry doors with typical trellis work and two entry gates, one on each road.

When the landlady said she needed the house back, in 1964 the family moved to Richmond Road, to the place known as Spartan Heights these days. And this is where they got acquainted with Mrs Pringle and four other families that lived within the same compound walls. 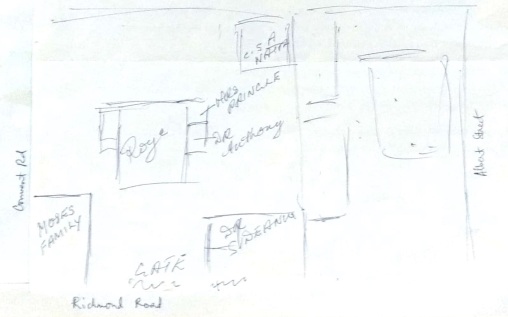 My mom drew this layout of the compound. It was a corner site, with Convent Road on one side and the entry gate facing Richmond Road. In those days, this was a rent-controlled property, so people who got allotted the houses needed to be connected to the government in some way.

Dr Sideanur had been living in an RCC roofed house at the rear end of the compound. He was a busy Allopathic doctor who practised at a clinic set up in the front of the compound. He subsequently bought the corner piece of land in front, built a house and moved there. He had a separate entry gate and he continued to run his clinic from the same place, complete with a compounder who would dispense the medicines prescribed.

When Dr Sideanur vacated the back house, the Nair family occupied it.

The Moses family lived in the house at the Convent Road corner. Like the other residents, they used the main gate to enter their house. Mr Moses was working in the government at Vidhana Soudha. He must have been in a senior position as a car would pick him up everyday to take him to work. His children Christine, Sheela and Angela studied at Baldwins, and Henry at Bishop Cottons.

With these two houses abutting Richmond Road, the middle portion of the premises was where the entry gate fitted.

The main central building was occupied predominantly by the Dr Roye family, with children Janardhan, Dhanpal, Radhika and Indira. Apart from being his residence, this was the campus of the Hahnemann College of Homeopathy run by Dr Roye. Yes, a full-fledged Homeopathy college, with a classroom full of benches. A formaldehyde tank to hold dead bodies for anatomy lessons was located somewhere in the compound. Janardhan finally married Angela Moses.

Also living in the main building was Dr Anthony, the third doctor in the premises. The type of medicine he practised is not recalled, but he used to get very few patients. It was a general observation that he might have been living off his wife who was working in the education department of the government. Grandma was happy to have Malayalam-speaking company.

Mrs Pringle’s house was adjacent to the Anthony’s, on the same side of the main building. It consisted of two rooms and a bathroom, and her door opened out to face the Nair’s house at the back. She didn’t get along with the Anthonys and it seems that she was initially quite crotchety and unwelcoming of the new Nair neighbours. However, it didn’t take long before she started getting friendly with the family.

Mrs Pringle was an early riser. Her door would open promptly at 6:30 a.m. to let in the morning sun, and grandma Mrs Nair would promptly send her idlis (or whatever was being cooked) for breakfast. Grandpa Mr Nair was very helpful to her and she loved the pretty garden that he maintained in front of his house. She was particularly fond of the youngest Nair daughter Pappi (Ramani) and gave her a tiny ivory elephant and a coin in a tiny metal box lined with cotton wool and dry leaves, for luck to get a job after MA. She had a good collection of smart dresses, all with matching belts. Once in ten days, a cycle rickshaw would draw up carrying one of her Anglo-Indian friends, and the two old ladies would have tea together. Then there was this door to door mobile library – a man on a bicycle who would bring books and magazines, and Mrs Pringle would borrow from him.

One morning, Mrs Pringle’s door didn’t open. When Grandpa went near the house he heard a groaning sound. The door was forced open and they found Mrs Pringle on the floor. She had fallen off her bed during the night. Grandpa arranged to take her to St Martha’s Hospital where the doctors discovered that her hip was fractured. She was in hospital for a few days, but they couldn’t operate on her because of her age. The doctors advised Grandpa to take her back home, which he did, and he got a full-time maid to take care of her. Mrs Pringle was very independent and she didn’t like someone taking physical care of her. One day it was found that the maid was cursing the old lady under her breath, so she was dismissed and a new one appointed. The onus was on Mrs Nair and her college-going children to ensure that Mrs Pringle was properly cared for, and keep a watchful eye on the goings-on in her house.

Knowing that she would have to move on some day, even before her fall, Mrs Pringle had kept a black dress in a box telling the Nairs that this is what she would wear when she dies. When she did die, in 196x, the hearse carried her body clothed in the dress of her choice, to All Saints Church on Hosur Road. During the funeral service, the priest made special mention of the kindness of the Nairs who cared for this 88 year old as one of their own. She was buried at the Hosur Road Cemetery.

Organised as she was, she had written her last will and testament. In this she left all of the money she had saved to Mr & Mrs Nair, stating that it would be useful to Mr Nair as he was building a house. When going through her belongings, it was found that she had a nephew who was in Great Britain. The lawyer wrote to the nephew informing him of his aunt’s death and will. The nephew was planning to come to India to check out her belongings but the lawyer dissuaded him, telling him that there wasn’t very much, and that as his aunt was very fond of the Nairs who had taken care of her, it would be appropriate for them to handle everything.

Thus it was that all that Mrs Pringle owned passed into the hands of Grandpa and Grandma. Grandpa arranged for her clothes to be given to people in need. The furniture became an integral part of the house in Domlur that was built partly with her money. Though the house itself no longer exists, some of her possessions are still with the family. Mrs Pringle’s prayer-hymn book and Bible are on mom’s book shelf, her writing table adorns the stairway of Pappi aunty’s house. There must be some other things as well.

Mrs Pringle, wherever she is, would probably be happy to see the picture of herself and her beloved husband, alongside members of the Nair family with whom she spent her last years.

One thought on “Mrs Pringle, the Richmond Road neighbour”