There was a time when the Bangalore City Police used to take the help of common citizens to maintain law and order in the expanding city.

In 1990, someone realised that HAM radio (amateur radio) operators had great potential to assist the police. In those days with no mobile phones, quick communication was possible only between the senior policemen who carried walkie talkies. The HAMs had an advantage over most policemen as they were licensed to carry wireless handsets (also called 2-metre), and operate them on certain frequencies (144-146 MHz). HAMs in Bangalore were very active on 2-metre and someone would always be available in case of an emergency.

So on 9th October 1990, several HAMs, who volunteered to work for the police for a certain number of hours per week, were appointed as Special Police Officers (SPOs) by the then Commissioner of Police, Mr R. Ramalingam.

Uniformed occupations (like the police) always attracted me. At one point it was a sort of dream to become a policewoman, like the girl Kalyani in the old Doordarshan serial Udaan. So I was thrilled to bits to become a Special Police Officer, complete with ID card and certificate. It was minus the khaki police uniform, but being an engineering student, our khaki workshop clothes almost covered this. 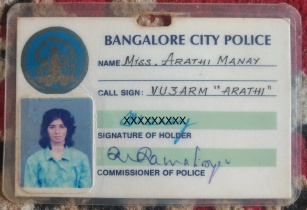 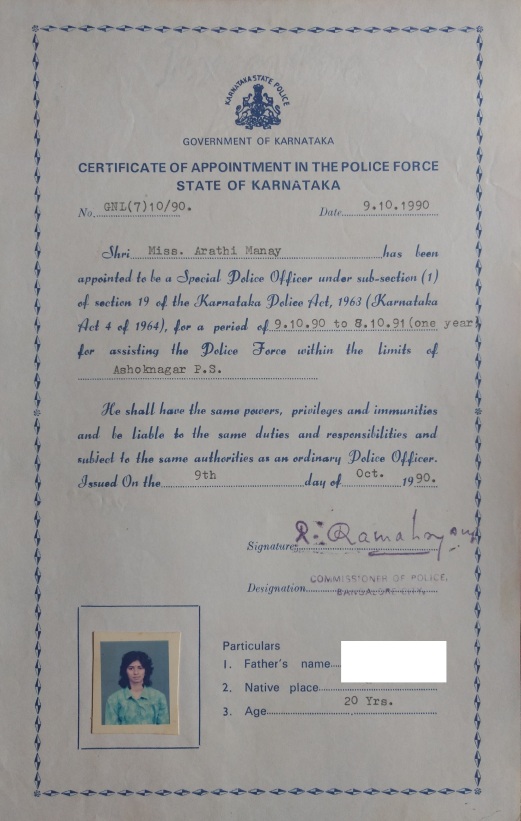 We were given patrolling duty in the areas near our homes, which was the Brigade Road area for me. It was a busy place. I would usually wear my khaki engineering workshop clothes. People would look in awe as we walked around with our crackling wireless sets. I can recall at least one instance when one of the SPOs was instrumental in busting a crime.

While the Police Act gives provision to appoint SPOs, I’m not sure if the practice is continued in Bangalore. I found that Aurangabad, in 2017, was working towards recruiting 10,000 civilians as SPOs, to assist the local police.