The last time I was “involved” in a World Cup Football final was in 2002. We were living in Singapore, and with its expatriate population and touristy attractions, the floating footballs, and the yellow Ronaldo mannequins in the shop windows were hard to miss.

On the day of the final (Sunday, 30th June 2002), my husband Srivathsa was busy in the office with the P&G-Clairol SAP integration cut-over. So my one year old son Siddharth and I were on our own and we spent much of the evening on Orchard Road, watching the Brazil-Germany final on the big screen. Orchard Road, one of the main shopping places in Singapore, was closed to traffic and the two big LCD screens on the road relayed the match that was being played in Yokohama, live. The atmosphere was electric and even a deaf man would  have known when the two goals were scored.

Twelve years later, my two sons are now both basement football players and getting to be appreciative of  the one sport that should really come to anyone as naturally as running. After all, the first reaction to a rolling ball is to kick it back! We’ve been watching the matches live on TV whenever sleep permits. So now I can tell Messi from Persie and Rodriguez from Neymar!

Tonight we will know if there is a possibility of a repeat of the 2002 final in the semi-final this year.

Last weekend, while my boys and their friends were watching Transformers at the neighbourhood multiplex, I had a couple of hours to kill. (No, I was not willing to join them for the show.) Should have known that footballs would greet me everywhere! 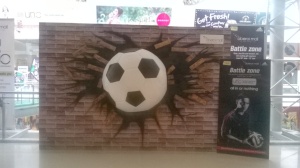 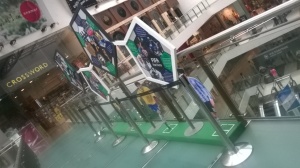 Picked up some FIFA trivia. The youngest, the oldest, the fastest, the most…

Really did not know that apart from WC cricket, Vivian Richards played WC football too!